The following are instructions for laying out stair balusters and determining baluster spacing.  This is a relatively simple process that can often seem difficult if you haven’t done it before.  This post deals with the layout only of rising staircases not level baluster runs (ie. balcony’s), or the installation methods of the differing types of wood and iron spindles.  Our BalconyPro tool can assist you will the quick, easy, accurate installation of straight level run balusters.   I’m also assuming that you have already determined the centerline of the handrail and the balusters on the treads.  If you are still trying to determine which handrail and balusters you would like to use, here are some great options:

The following diagram using the three baluster per tread scenario will be useful to help you understand the descriptions of the formulas below.  Also, the baluster placement (1 & 2 or 1, 2 & 3 as per the diagram) are always measured from the back riser forward toward the nosing in this method of layout. 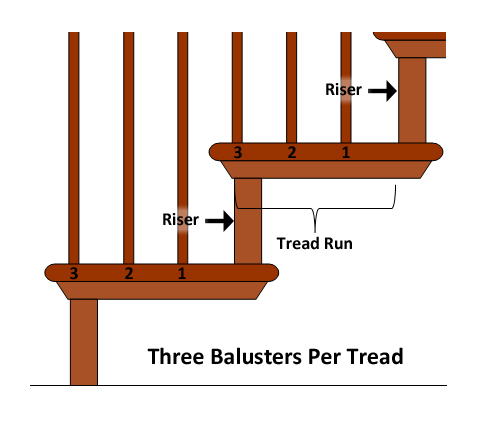 Typically the first step in this process is to determine the maximum spacing between your balusters as allowed by code in your area.  I am going to skip this step for now and we will come back to it later.  Just remember in most areas the maximum code is 4”, stated something similar to this: “No space shall be large enough to allow the passage of a 4” sphere.”   Since the math is virtually the same for all baluster patterns let’s just go through the two most common scenarios completely so that you can see why this first step is important and if you understand it, it will save you having to go through the trial and error we are about to do.  So, skipping the real first step here we go:

Step 1.  Determine the tread run.  The tread run is the distance depth of the tread not counting the overhang.  There are a couple of ways you can get this measurement.  One method is to measure the full tread from the back riser to the very front overhang, then measure just the overhang from the riser below and subtract this from the full tread depth.  For example, if you have an 11 ¼” tread as measured from the back riser to the front of the nosing and an overhang of 1 ¼” as measured from the front (or lower) riser to the front of the nosing, then the tread run is 11 ¼” – 1 ¼” = 10”.  You can also measure the tread run from riser to riser (if not concealed behind a kneewall) by butting your tape measure to the back riser at the edge of the stair and “eyeballing” the riser below.  Finally, you can use a square to measure from nosing to nosing (if your overhangs are all the same then this is the same as measuring from riser to riser).  Simply place your square on a tread until the vertical arm touches the tread nosing above.  You can then make a small mark on the lower tread or just hook your tape measure on the back of the square and measure forward to the front nosing.

Step 2.  Determine the baluster width.  This will be at the base.  The minimum baluster width is a separate issue that we will address shortly.  So, simply measure the width of the baluster.  Let’s use 1 ¾” for this example.

Step 3.  Calculate possible baluster layouts or Center to Center Spacing.   First, divide the tread run by the number of balusters.  Again, the process is simple and a little trial and error won’t take long though once you understand it you can usually go straight to the correct pattern.

I ran through both of the most common examples so that you can see the entire process. The more simple way to do the trial and error method is to first determine which baluster spacing works for your situation then do only one of the calculations to get your layout.  So, let’s assume we have not done the full calculations yet and have only the two possible baluster spacings, 5” and 3 5/16”.  You must decide first which will meet code and if both do then which you prefer.   To do this you simply take the spacing minus the minimum baluster width and see if that measurement meets the maximum code spacing.  So, if you are using 1 ¾” pin top wood balusters these typically taper down to ¾”.  In order to ensure you meet code that is the important measurement.  So in our example, using the 2 baluster per tread option you take 5” – ¾” which equals 4 ¼” at the widest point between the balusters which would not meet our 4” code.  We then try 3 5/16”.  Obviously, this meets code but to get the spacing between balusters anyway (not center to center) we take 3 5/16” – ¾” = 2 9/16” between balusters at the widest point.

There is one other thing you can do to adjust the balusters.  This may help if the balusters closest to the newel post at the top or bottom of the stair are too close or far away.   Simply add or subtract a small measurement to the existing positions.  So say you want to adjust all of the balusters 1” back on the tread.   Just subtract 1” from each measurement.  In our example of a three baluster per tread pattern, it would be like this.