Like all of the other stair parts in my “you get what you pay for” series, Iron Balusters (aka metal spindles) are no different.  The quality variations between one iron baluster and another are not drastic but enough that you should understand the difference so you don’t compare the two different styles when considering the price.

I’ve written previous articles on the differences between iron balusters.  Today I want to focus more on the reasons why the two should not be compared side by side as far as price is concerned.  Hollow iron balusters are less expensive.  This is because they require less metal and because they are lighter.  They are also not as strong, but the difference is not such that they should be avoided, it just means that your balustrade will “flex” more because of a property called deflection.  Solid Iron Balusters will also flex but not as much so the railing system is stronger.  As far as aesthetics, Solid Metal Spindles have a more “hand-forged” appearance with a little more texture, sharper corners and more variations in the surface.  Hollow Iron Balusters tend to be smoother with slightly rounded corners and don’t typically exhibit the same “hand-made” look.  I want to be clear here, neither Solid nor Hollow Iron balusters are handmade these days, but the manufacturing process of the solid metal spindles does have a more authentic iron-work appearance. 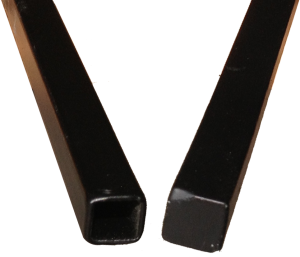 So what does all of this mean?  If I, as a professional who deals with both versions every day, were to stand back and compare a Single Basket Hollow Iron Baluster and a Single Basket Solid Iron Baluster in a banister, it is very unlikely that I could tell the difference.  Up close is a different story, even without being able to heft the balusters in my hand, the subtle details I mentioned above make the difference obvious.  A solid baluster system will be stronger; the balusters will look more “authentic” and have a more textured feel.  At WoodStairs.com we sell thousands of hollow and solid metal balusters per month and consider both to be excellent products.  Just understand when comparing hollow vs. solid metal balusters that while they are both structurally sound, the solid iron balusters are preferred by most customers, if the price is not an issue.  Remember that “cheap” or “discounted” bargain balusters that are not defined as solid or hollow, are typically the less expensive hollow type.  So when comparing prices between two stair part companies make sure you are comparing the exact same type of iron balusters, because as in the case of WoodStairs.com we offer both varieties.  If you were to compare one company’s hollow metal balusters to our solid metal balusters we may be more expensive but hollow to hollow we typically beat their price.  If for some reason our advertised wrought iron baluster prices are higher than our competition, then we have a low price guarantee on all of our stair parts. 🙂