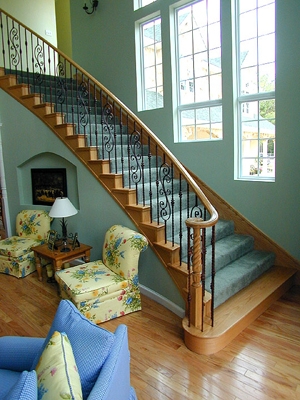 Determining the number of balusters your stairway requires and their spacing is a simple process that requires only a couple of steps.  Yes, that rather weak pun was intended. 🙂

First, you need to know the tread run.  This is the length of the stair tread from riser to riser.  This is often confusing because people tend to measure from the back riser to the front of the tread nosing.  If you are able to measure at the side of the stairway you can usually place the end of the tape against one riser and measure across the tread “eyeballing” the distance to the riser below it.  If you don’t have access, such as in the case of a closed or kneewall stringer, just measure one full tread from the back riser to the nosing.  Then measure how far the nosing sticks out beyond the riser below and subtract this from the first measurement.  For example, if you have a measurement of 11 ¼” from the riser to nosing on top of the tread then 1 ¼” from the riser below to the nosing overhang you have a tread run of 10″.

Next, you divide the tread run by the minimum code spacing.  For example, if you have a 10” tread run and your local building code requires that a 4” sphere may not pass through the balusters, you would take 10 ÷ 4 = 2.5.  Thus you need at least 2.5 balusters per tread to meet code.  So, we round up to 3 balusters per tread multiplied by the number of treads and there you have the number of balusters required for your stairway.

Now that you know the spacing you need to know where to start your layout.  This can take a little trial and error but you want to make sure that the baluster at the leading edge of each tread (nearest the nosing) is back far enough as to be behind the riser.  This ensures the greatest strength and that you do not drill through the nosings when installing.  One last detail to consider is your newel post placement.  The post at the bottom of the stair is often notched into the tread nosing against the riser, in this case, the first baluster on that tread may be eliminated altogether depending on your spacing and layout.