Douglass Fir is one of the hardest and heaviest softwoods available in North America. It is widely used and has a distinct reddish tan to yellow-gray growth rings. When quartersawn, its grain is strikingly straight and consistent.  Douglas Fir is often offered in both mixed grain and vertical grain. A mixed grain douglas fir consists of a much wider and less consistent grain. Vertical grain douglas fir is obtained by the way the wood is milled. Vertical grain doug fir is more resilient, has a higher strength to weight ratio, and offers a more uniform straight grain that you won’t get with a mixed grain.  Designers and architects often recommend the use of vertical grain in noticeable areas where the beauty of the grain can be appreciated such as doors, windows, and stairs. 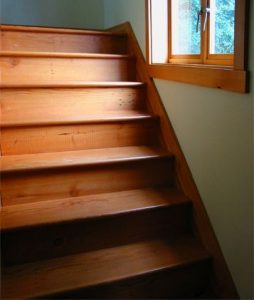 For the purpose of being used as a tool for home building construction projects, the vertical grain Douglas-fir is one of the best options for wood stair parts including tread pieces.

According to the Arbor Day Foundation, the Douglas-fir tree used often in yards and parks across the United States. Native to North America, the Douglas-fir is an evergreen tree, which means it keeps its foliage year round. The tree itself can grow to a height of 250 feet and can spread up to 20 feet at maturity compared to other trees, Douglas-fir grows at a medium rate with height increases of 13 to 24 in per year. The Douglas fir is great for areas of full sun and partial shade

The Douglas-fir is written with a hyphenation because it is actually not a true fir. This means it is not a member of the genus Abies. This is why the name is often written with a hyphenation or as one word. Sometimes it is also called the Douglas Pine. The Douglas-fir is often known to grow very large. It also produces a large amount of usable lumber and veneer products for plywood.

About our Douglas-fir Wood Stair Parts

There are a lot of reasons to choose Douglas-fir lumber to use in your upcoming wood stairs project thanks to its versatility. Check out our website to see our stair parts available in Douglas-fir.

In the Woodworking industry, it is known to be a valuable commercial timber that is widely used primarily in construction and building purposes because the wood is very stiff and strong for its weight. It is known to be among the hardest and heaviest of the softwoods available in North America. 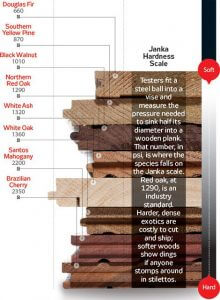 Typically a Douglas-fir can be identified with its light brown color and a hint of red or yellow. Vertical grain Douglas fir hardwood is known to be moderately durable when it comes to rot resistance, but it can be susceptible to certain types of insect attacks. The workability of Douglas fir is that it machines well. It takes well to stains, glues and nails and also finishes well for wood projects.

The most common uses for vertical grain Douglas fir Lumber structural construction lumber, which makes it a great choice for your wood stairs project.