What is Landing Tread?

Landing Tread is a type of stair part that is used either under a floor level banister as Shoe Rail or around an intermediate landing of a stairway.  In banister applications it is the board on the floor, and balusters and posts are installed on top. It creates a border between the finish flooring and the balustrade itself.  In applications where a landing tread is used on an actual stair landing it creates a border around the landing.  It is also commonly called Bullnose Moulding, although these are two slightly different versions.

In situations where Solid Treads and Risers are being used, Stair Landing Tread creates a border around the landing that matches the tread nosing to keep the appearance consistent.  This is because often, landings are so large that instead of using Solid Tread type material on the landing itself, the landing tread is used to create a border around hardwood flooring or carpet in the interior of the landing.  Because solid treads are often thicker than the flooring, landing tread is often rabbeted so that it has a thicker overhang and thinner body that matches up to carpet or flooring.  This creates a joint between the landing tread and the flooring that is flush to eliminate a raised tripping hazard..

Solid Treads are also available in ¾” thick material, which is often the same thickness as the flooring and therefore the landing tread does not require the rabbet.  Instead, a ¾” thick Shoe Plate, is attached to the floor and molding installed at the underside of the overhang.  In this case, ¾” thick Solid Treads are used with an accompanying molding to create the same look between the treads, intermediate landing and upper floor. 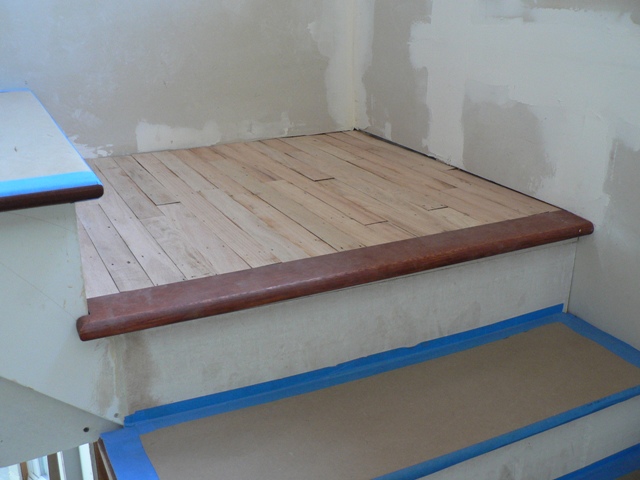